The first is the New Belgium Bottleworks 10th Anniversary Wild Ale. The beer was blended at New Belgium during GABF week by owner Matt Vandenberghe, operations manager Matt Bonney and a crew from Brouwer's, Click Distributing, and the Toronado. Bottleworks 10 is a blend of three beers from foedres #3 , #13, and #2 (foedres are the wooden aging vessels that house beers like La Folie, Le Terroir and Eric's Ale). New Belgium brewer Eric Salazar dosed both the kegs and bottles with Brettanomyces Lambicus and, according to NB sensory expert Lauren Salazar, the beer "turned out fantastic! Different from any of our sour blends before and much more brett forward- kinda like Biere de Mars and La Folie ran smack dab into each other." New Belgium Bottleworks 10 will be available in 750ml bottles for $20 each. There will be a 1 bottle limit per customer per day. 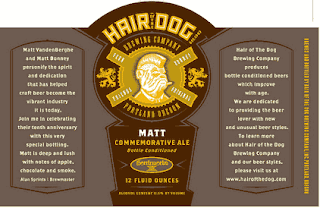 Beer number two is Hair of the Dog Matt. To create Matt, HotD Brewer/Owner Alan Sprints took his Adam and blended a combination that was aged in both apple eau-de-vie and 33 year-old bourbon casks for a year. Sprints says "Matt is deep and lush with notes of apple, chocolate and smoke." Matt will be available in 12oz bottles for $15. There will be a 2 bottle limit per customer per day.

From 5-7 pm we will have a tasting of both 10th Anniversary beers. Hair of the Dog's Alan Sprints and New Belgium's Eric Salazar and Jamie Mastin will be on hand along with the two Matts. The tasting will cost $2.

Afterwards, don't forget to head over to Brouwer's where the celebration will continue with the tapping of kegs of both 10th Anniversary beers as well as Russian River Deviation (Bottleworks 9), Flyers 120 Schilling Scotch Ale (Bottleworks 8) and Elysian Icarus (Bottleworks 5).